Obsession is a common theme in superhero comics. Whether good or evil, many characters can be considered to be governed by a particular obsession. Justice, revenge, perfection, conquest, and many others are all extremely common examples. In the case of two generations of Reverse-Flash – Professor Zoom and Zoom – obsession is the symbolic mantle of their shared mythology. Several of Batman’s villains are driven by obsession as well: Mr. Freeze is obsessed with curing his wife, Scarecrow is obsessed with fear, and Two-Face is obsessed with chance. But for Professor Hugo Strange, his preoccupation with Batman goes far beyond mere obsession.

Hugo Strange first appeared in 1940 in the pages of Detective Comics #36, making him one of Batman’s earliest adversaries. In fact, even after the debut of the Joker that same year, Hugo Strange was still referred to as Batman’s arch-nemesis for some time. But it wasn’t until his reintroduction to the comics decades later that his particular brand of Batman obsession would enter the mythology. A brilliant scientist and psychiatrist, Hugo Strange was a prominent and legitimate figure in Gotham City’s medical circles, hiding his criminal activities which increasingly centred on Batman, who he found to be a fascinating case-study. Determined to know the inner workings of such an enigmatic figure, Strange used his crimes to observe and research the Batman while simultaneously working alongside the Gotham City Police Department as a consultant regarding the Caped Crusader. Through this nearly all-consuming obsession, he narrowed down the physical and psychological profile of the Dark Knight and eventually deduced his true identity as Bruce Wayne. 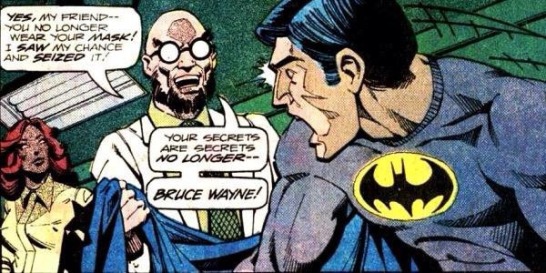 But Hugo Strange’s obsession with learning all there is to know about Batman goes beyond mere knowledge; unlike the type of malicious obsession characterized by supervillains like Professor Zoom, Hugo Strange’s ultimate goal is not to erase Batman, but to become him.

This was not always the case, but after learning Batman’s secret identity, Strange attempted to ruin the Dark Knight by posing as Bruce Wayne and destroying Wayne Enterprises. He also intended to auction the knowledge of Batman’s identity off to the highest bidder, but when he was captured and tortured for that same information, he refused to give it up, instead faking his own death in order to escape. When he resurfaced, he had not only resolved to become the Batman himself, he had constructed an elaborate replica of Wayne Manor, the Batcave, and even robotic duplicates of Alfred and Dick Grayson. He also fashioned himself a functional Batsuit as well as a replica Batmobile, committing crimes throughout Gotham in an attempt to have Bruce Wayne put down by the police so that he could take over as Batman.

In post-Crisis storylines, this bizarre obsession with Batman is tied to Strange’s preoccupation with physical and mental perfection. In Batman he sees a human man with no superpowers who has developed himself to the physical and mental peak, whose athleticism and intellect are demonstrably superior, particularly with regard to Batman’s combat ability and technological achievements, respectively. But as a man of science, viewing Batman as the ultimate physical and psychological specimen to examine, one would assume that part of that obsession and exhilaration would be in sharing his results and proving his own genius. So why does Hugo Strange repeatedly protect Batman’s secret identity?

A compelling case could be made that Hugo Strange’s obsession with Batman has transcended the adversarial and turned into a form of admiration. Strange spent years as a scientist toying with genetic manipulation in an attempt to unlock the “perfect” specimen, the failed results of which were his hideous Monster Men. But after witnessing the Batman, Strange all but abandoned those experiments. He did not redouble his efforts to try to create a perfect Batman replica. It was almost as if the real thing struck him as so incredibly perfect he dare not try to recreate it – as with a work of art, Strange shifted his focus to trying to understand and appreciate everything there was to know about Batman. And when he learned Batman’s secret identity, what then made him guard that secret so closely? Certainly, Strange seems to have a kind of twisted respect for Batman – a trait shared by a number of Batman’s enemies – but his admiration for the Dark Knight ultimately shines through in his own attempts to become and replace him. Discovering the confidence and strength of the Batsuit, as well as the symbolic “shamanistic” properties of being the Batman, is a profound moment for Hugo Strange, in which he appreciates the confluence of tragedy and determination and natural ability that Batman embodies.

Hugo Strange discovers how it feels to be Batman – DC Comics

There is no doubt, of course, that Professor Hugo Strange is a villain. His many criminal activities, immoral scientific practises, and cruelly violent social experiments have cemented him on the evil side of the moral spectrum. And yet, his unique status as an admirer makes his relationship to Batman so much more complicated. Beyond obsession or respect or compulsion, Strange looks up to Batman. His mythology represents a sort of inversion of the hero worship symbolized by Booster Gold. Where the latter is a lighter, more comedic take on the hero benefiting from being idolized, Hugo Strange stands as warning of the danger of worship.

Unlike other villains, Strange buys into the optimistic side of Batman’s symbolism. Where most villains view Batman as a symbol of fear, Strange sees him as an inspiration. Quite literally, he is inspired to become the Batman himself. This is something that Strange shares with heroes like Batgirl, Spoiler, the Robins, and many others. In this way, it is almost tragic that Hugo Strange’s inherent morality is one of evil. As a force for good, he may very well have been a valuable member of the Bat-family; but as a villain, his admiration of Batman is exactly what makes him so dangerous.

@DoctorDCNov 27
RT @CBR: UPDATE: A Warner Bros. spokesperson confirms that the TV edit of Birds of Prey was added to HBO Max in error and that the unedited…

@DoctorDCNov 27
Meanwhile, Batman says “I will fucking kill you” in the Snyder Cut. https://t.co/F2y1hfZ5ik