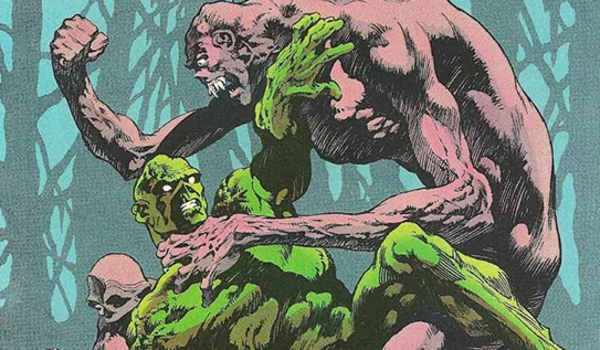 The DC Universe is full of deities of all descriptions. From the Greek pantheon to Rama Kushna to the God of the Abrahamic faiths, the mythology is populated by numerous gods and avatars, each of whom occupies a specific place in the natural world. Among these more recognizable figures from non-comic literature, the DC Universe is also home to powerful elemental forces. One of the most powerful of which is the Swamp Thing, a shambling mass of vegetation who channels the combined power of the world’s plant life. For a hero who wields the power of life, only a master of death could pose him any series threat. That master is Anton Arcane, and his rivalry with the Swamp Thing is an incredible existential battle to secure the balance of the natural world.

First appearing in Swamp Thing #1 in 1972, Alec Holland was a scientist in Louisiana working on a bio-restorative formula – a chemical miracle that could turn even an arid desert into a lush forest. Before he could make his world-changing discovery public, his lab was attacked. Holland was incinerated in the lab fire, running out into the swamp where he died. The plant life of the swamp, affected by the formula, absorbed Holland’s consciousness and memories, becoming the Swamp Thing, the avatar of the Green: the collective plant force of the world. As avatar, Swamp Thing acts as the front line against environmental devastation and other evil that affects the well being of the planet in general, though because the Swamp Thing absorbed Holland’s consciousness, it believes itself to have been human once and therefore strives to balance the interests of the Green against those of humanity.

As Swamp Thing, Holland taps into the vast web of plant life known as the Green, which enables him to control and manipulate all forms of vegetation. He has the power to speed the growth of existing plant life, and as such he can alter his shape and size at will, simultaneously increasing his strength and durability to superhuman proportions. Furthermore, he effectively cannot be killed, as he can reform a physical body out of even the most meagre of plant life. The Green enables him to utilize pheromones and other chemicals found in vegetation as well as teleport himself around the world, able to appear anywhere on Earth where plants exist. He is vulnerable to fire and since his strength is tied to the Green, any significant destruction of the Earth’s plant life can weaken him.

Swamp Thing is an agent of the Parliament of Trees, the managing force of the Green, whose membership is made up of all the previous avatars. Though he tends to work alone, he has partnered with other heroes in the past; notably, the sorcerer John Constantine. In the New 52, he is a reluctant member of the Justice League Dark.

Born in the 19th-Century, Anton Arcane was obsessed with death from a young age, as well as exhibiting a disturbing predisposition to cruel, violent, and otherwise depraved behaviours. As a young man, he enrolled in the Hamburg School of Medicine, where he conducted unethical experiments on cadavers, attempting to reanimate them in order to uncover the secret of immortality. His experiments were discovered – as well as his addiction to drugs, his violent, immoral nature, and even his acquired necrophiliac habits – and he was expelled from the school. He served as a field doctor for the Germans in both the First and Second World Wars, where he took advantage of the vast numbers of casualties to continue his experiments. He eventually encountered the Swamp Thing and was convinced that he held within him the secret to eternal life, and from that point on embarked on an obsessive campaign against the plant avatar.

Anton Arcane possesses a genius-level intellect and, having trained and worked as a doctor, is an accomplished surgeon and scientist. As such, he developed a disturbing genetic process that created the monstrous Un-Men – deformed, zombie-like creatures under Arcane’s complete control. Arcane combines his science with acts sorcery and black magic, becoming a proficient necromancer and eventually gaining the immortality he sought, though he himself took on a monstrous form. Despite being killed and banished to Hell, he managed to rise to the rank of demon and eventually return to life.

In the New 52, Anton Arcane is chosen by the Parliament of Decay to be the new avatar of the Black, aka the Rot; the force of death that opposes the life forces of the Green (plant life) and the Red (animal life). As avatar of the Rot, he can control and replicate any necrotic matter, as well as raise the dead and drain life from living things.

Anton Arcane first appeared in the second issue of Swamp Thing and since that time has been the Swamp Thing’s primary and most persistent nemesis. Their rivalry, though lesser known than some of the more iconic characters, is one of the strongest in the entire DC Universe, in part due to the nature of their conflict.

The Swamp Thing, being the avatar of the Green, represents a force of life in the world. He draws his power from a living web of plant life; the sum total of energy and consciousness of the Earth’s vegetation is at the Swamp Thing’s disposal, and his very existence is meant to ensure the safety and propagation of plant life around the world. In essence, Swamp Thing wields the power of life and creation – something that was also true of Alec Holland before his transformation,as his bio-restorative formula was developed for a parallel purpose. By contrast, Anton Arcane has always been an agent of death. Long before he became the avatar of the Rot, he was obsessed with death and necromancy. Joining with the Rot only strengthened his purpose: to consume the world in death and decay. On the surface, this rivalry appears incredibly similar to that of the Golden Age Green Lantern (Alan Scott) and Solomon Grundy; the forces of life and death facing off through the hero and villain, respectively. In the New 52, this comparison is made all the stronger with Alan Scott serving as Earth 2’s avatar of the Green and Solomon Grundy representing that world’s Rot. But there is a deeper level to the rivalry between Swamp Thing and Anton Arcane that distinguishes it from its Earth 2 counterpart.

Though the life-death metaphor is clearly present and strong within the mythology, it is often addressed that each requires the other to exist. Death, by definition, cannot exist without life. As a negative state, it has no defining characteristic of its own other than being the absence or antithesis of life. Likewise, life depends on death – the processes of death and rot release the minerals and energy that allows for and nourishes new life. Though life and death are opposed, they are also completely co-dependent in what is truly a cyclical relationship. 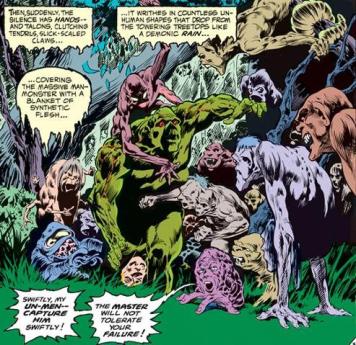 What differentiates the Swamp Thing and Anton Arcane’s rivalry from that of their Earth 2 counterparts is that their contest transcends their respective sides of that cyclical relationship and takes the fight to the metaphysical plane. Anton Arcane does not see himself – or the Rot, for that matter – a part of a larger system. Instead, he seeks absolute death; that is, the end of all life in perpetuity. Arcane’s obsession does not allow for the resurgence of life and is therefore not only an incredibly stark vision of death, but is also a wildly unnatural aim. The unnatural has found form in Arcane since his first appearance, in which his Un-Men mark a dark perversion of nature – a genetic aberration achieved through artificial processes that do not occur in the nature. As a necromancer, he raises the dead; animating the soulless in direct contravention of the natural order of the world. Swamp Thing, however, is a champion of the natural order of things. The Parliament of Trees, though a representing a force of life, shares the Rot’s disturbing desire for complete dominion over the world. This too, would be unnaturally out of balance. But though Swamp Thing may draw his physical strength from the Green, his character is rooted in his memory and belief in his human soul. As such, he recognizes the need for balance between the Green, the Rot, and also the Red. This makes him difficult to manage and control from the perspective of the Parliament, but fortifies him as a representative of the natural order; of life and death as symbiotic enemies destined to oppose each other but unable to exist without the other.

It is a wildly ironic metaphor. Swamp Thing is physically monstrous and Alec Holland’s journey as the avatar of the Green has been frought with his own inner demons regarding the “unnatural” being he has become. But in reality, despite his outward appearance, Swamp Thing has done more to represent the natural order of the world than any other being in the DC Universe, which makes Anton Arcane all the more perfect an arch-nemesis. His cruelty, his actions, his powers, and his goals are deeply unnatural, solidifying his rivalry with Swamp Thing as more than worthy to stand among the greatest in DC’s mythology.

@DoctorDCOct 16
I’m not saying not to complain. But try also to find something that excites you. Why bother with any of this if we… https://t.co/dtoptbSqwk

@DoctorDCOct 16
So if your fave didn’t get much love today, look for something else to be excited about. Milestone; lots of anima… https://t.co/smUmoJCVPC