Posted at 07:02h in Uncategorized by admin 0 Comments
0 Likes

It has only been about a week since we had the privilege of performing live at YukomiCon in Whitehorse, Yukon. Not only was it our first-ever live recording, but we were joined by Canadian 90’s icon Phil Guerrero, better known to many as “PJ Fresh Phil”, host of a children’s television network’s afternoon lineup.

I thought that it would make sense for this week’s blog post to explore my introduction to one of DC Comics’ biggest successes of the 90’s: Batman: The Animated Series. The first episode of B:TAS that I ever saw was perhaps a strange one, as it didn’t feature any of the “big” Batman villains like Joker or Two-Face or the Riddler. Neither was it as recognizable an episode as the Emmy-nominated “Heart of Ice” or the hauntingly iconic Scarecrow episode (featuring the now-famous line “I am Vengeance, I am the Night, I AM BATMAN!”).

In fact, the first episode I ever saw, and therefore my first introduction to a Batman other than Adam West, was the 1992 episode “Feat of Clay”. 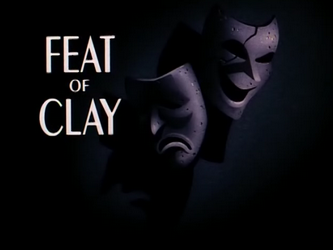 The two-parter episode seemingly begins with Bruce Wayne at the centre of a criminal consipiracy, even trying to kill Lucius Fox. The Wayne in question is of course an imposter; in reality his name is Matt Hagen, formerly a famous character actor left horribly disfigured after an accident who uses an experimental chemical which allows him to mold his face into any figure. The supplier of the chemical is a corrupt businessman who uses it as leverage to force Hagen to commit crimes on his behalf. When Hagen goes rogue, he is drowned in the chemical, permanently transforming into the massive shape-changing monster Clayface. He seeks revenge but is eventually stopped by Batman, who learns the truth of the situation. 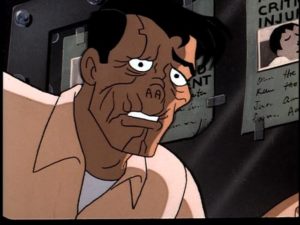 As a child, I imagine that what struck me about the episode was the incredible animation. The nuance and horror of Clayface’s transformations (especially when out of control) still holds up, in my opinion, and certainly would have caught my attention back then. But rewatching the episode years later, it occurs to me that “Feat of Clay” is a prototype of the tragic supervillain framework that would be used later in the Mr. Freeze-centred “Heart of Ice”.

Matt Hagen is a tragic character struggling to maintain a sense of identity in the face of his accident. He wrongly associates his look and his profession with his intrinsic value, which leads to his desperate use of the experimental chemical. And later, when Batman confronts him with multiple images of his past roles and selves, this identity crisis manifests physically as Clayface is incapable of maintaining any one form. The result is an ever-changing monster who doesn’t even know what it is anymore – a monster that Batman dispatches (albeit non-lethally) as a matter of mercy more than vengeance.

In general, Batman: The Animated Series is well known to have been one of the most artistically daring and challenging kids cartoons of its era (and possibly since), but even among its own roster of incredible stories, “Feat of Clay” stands above the rest. It introduced me to a Batman that was stern but compassionate, and to the notion that villains are not always what they seem. And it set the stage for incredible reinventions and reinvigorations of other villains from Two-Face to the Mad Hatter to Mr. Freeze – bold and intricate artistic decisions that made the show one of the most celebrated cartoons of all time.