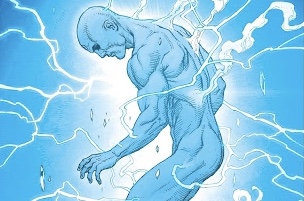 This week we are talking all about teleportation devices and powers, and whether the person who appears is the same as the one who left!

(8:28) Other than Wink and the Aerie, who else has stolen something using teleportation?

(12:06) When the New Gods boom tube to other Earths, do they run in to their other avatars?

(16:20) what are the different ways that characters teleport?

(23:33) What have been the adverse affects of the Zeta-Beam?

(27:27) Which hero/villain can teleport the furthest distance?

(32:42) Best/most terrible teleportation mishaps?  Why are there so few teleporters?

(36:50) Is Swamp Thing’s ability to travel through the Green teleportation?

(48:29) Do any DC teleporters use the “cloning/disintegrating” method?

(58:52) Dapper sense of style and shops at Magician’s Warehouse.

(59:09) Based on their choice of gun, they’re likely a pimp, rich, or just really like Red Dead Redemption.

(59:52) Accessorizes with a monocle they probably don’t need.

Sphere of the Gods