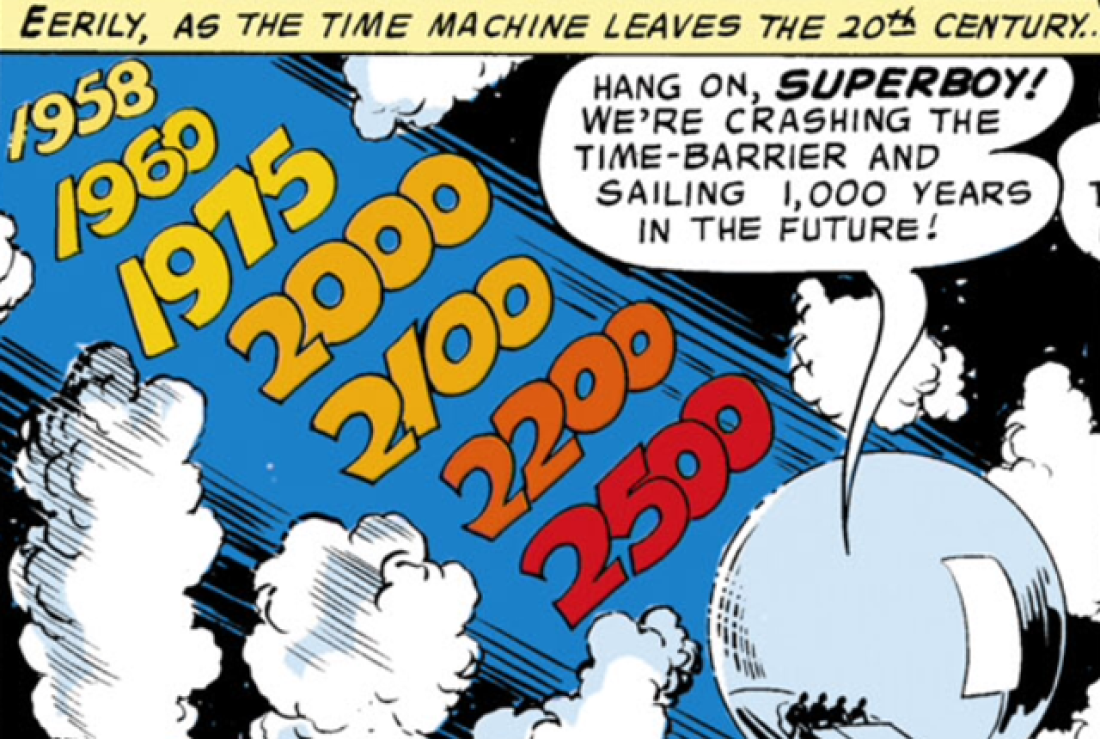 In this week’s issue we don’t need roads… That’s because we’re going back to the future… and the past… That’s right capes and cowls! This week we’re talking TIME TRAVEL. Which speedsters have caused the most damage? Who’s your favourite time trapping villain? All this and more, but first we talk all that is DC News. From new rules in the house that Wonder Woman built, to the brand new Black Lightning show. We give you all the latest and greatest from the distinguished competition… But whats that sound? Is it a bird? A plane? Why it’s a new segment! We’ve jammed so much into this issue you’ll have to listen to hear it all.

Impulse: Bart Saves the Universe #1 – Extant tries to fights the JSA, trying to alter the past and save someone destined to die, thus disrupting the timeline.

Flash vol. 5 #21 – Part of the “The Button” arc, the Flash and Batman travel back in time through the Speed Force.

Convergence #8 – Brainiac sends Parallax, the pre-Flashpoint Superman, and other characters from deleted timelines back in time to prevent the destruction of the infinite Earths from the original Crisis.

Justice League 3000 vol. 1 – This series takes place in an alternate 31st Century where the Legion of Super-Heroes does not exist, with cloned future versions of the Justice League existing instead.

The Multiversity: Ultra Comics #1 – Ultra Comics explains that his Ultra-Gem connects him to comic book readers from past, present, and future.

Flash: Rebirth #5 – Eobard Thawne, the Reverse-Flash, reveals that the Negative Speed Force allows him to alter time without consequence.

Zero Hour #3 – The Time Trapper is revealed to be a future version of Rokk Krinn, otherwise known as Cosmic Boy.

SHOW NOTES (courtesy of Josh Gill)
WW2 will be first film to implement new anti-sexual harassment guidelines
Hot Toys brings Man of Steel to life again with its new Superman figure
Raven fights the darkness with darkness in all new series
Superman is brining back the classic red trunks
Flashpoint movie gets a pair of comedy directors
Black Canary is the new R’as Al Ghul
DC Comics commercials return to television
DC finished 2017 strong in comic sales leading over Marvel
This is Us star in talks to play the Wizard in Shazam
Black Lightning Premier
The Doctor’s Pulls
Time Travel
Time travel used to take out Extant saving Atom Smasher’s mom.
Favorite or most entertaining method of time travel?
What time altering event are you most relieved was retconned? What time altering event do you wish had stuck? What time altering event do you wish would be retconned?
Are comic book readers 3-D time travelers?
Has the Flash done major changes other than Flashpoint?
What hero would most like to go back in time and correct costume fouls?
Can “Blue Dick” time travel?  If so, will he show up on The Flash unify the timeline?
Will you ever do an episode about time travel in general?
Is the TV version of Rip Hunter accurate? Best/worst Rip Hunter stories?
Who is your favorite time traveling villain?
Best time traveling snack?