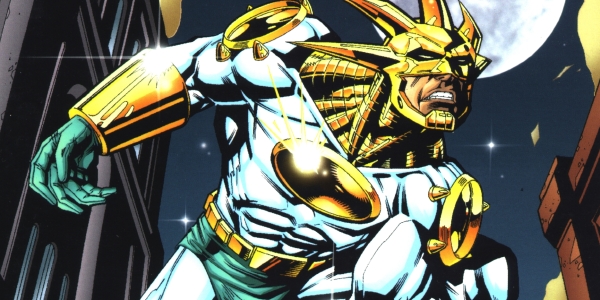 Are we in control of our own destiny?

This is a common question posed by many genres of literature, but it has a special place in superhero comics. Sometimes, it is as simple a construct as the notion that possessing superhuman abilities thrusts one into fate’s spotlight – a sort of artificial destiny in which the hero or villain views their own powers as leading them to a pre-destined role. In other cases, destiny is a hard and fast construct, often tied to magical and mystical forces in the universe. Within the mythology of the DC Universe – where humans and superhumans exist side by side with various energies, mystical beings, and even gods – destiny is a frequent subject, but it is perhaps most clearly explored through the mythos of Aztek, the Ultimate Man.

In ancient times, a battle was fought between two powerful Aztec gods: Quetzacoatl, the god of light; and Tezcatlipoca, the shadow god. Tezcatlipoca was defeated and banished, but his prophisied return drove Quetzacoatl to leave behind his helmet – the Mask of Warriors – trusting his people to have a worthy champion ready to fight the shadow god. Thousands of years later, the mysterious Q Foundation carried on this tradition of training and grooming warriors for their cause. When their current champion strayed from the path by falling in love, he was killed and his infant son was taken by the Q Foundation as their new best hope against the shadow god. Known originally as Uno, and later by the alias Curt Falconer, the boy was trained both physically and mentally to be the peak of human perfection, eventually inheriting Quetzacoatl’s helmet and becoming Aztek, the hero of his hometown of Vanity City.

Over countless generations, the Q Foundation managed to enhance the innate power of the Mask of Warriors through occult technologies, granting Aztek a whole host of superhuman abilities including: flight, super-strength, speed, endurance, enhanced senses, and energy projection. He is also able to access the consciousness of all previous wearers of the Mask. The Mask and his battle-suit protect him from the harshest environments, including the vacuum of space, and contain a power source derived from a 4th-dimensional energy.

Aztek’s incredible power and training allowed him to rise to the role of hero in Vanity City as well as with the Justice League, but his true purpose always loomed large within his mythology. Each heroic deed he accomplished was, according to both himself and the Q Foundation, more experiential training for his real destiny: to defend the Earth against the return of Tezcatlipoca.

This most central premise to Aztek’s mythos is both its most fascinating, but also its most problematic. As with most prophecy, the one involving Aztek is incredibly vague. It neither implies nor describes a timeline for Tezcatlipoca’s return, nor does it provide any information on the form the shadow god might take upon returning. There are no details to help Aztek determine what his destined battle will be – he could very well have already faced the shadow god and emerged easily victorious. Questions about the prophecy’s lack of specificity rise to the surface of the mythology when the hero sacrifices himself to defeat the cosmic destroyer known as Mageddon.

Mageddon was the aggression-inducing force that brought the Ragnarok down on the Old Gods (predecessors to the New Gods of the Fourth World). When it came to Earth, many saw it as the ultimate evil: the angel Zauriel believed it to be the reason he was sent from Heaven to protect the Earth, and the Q Foundation fully believed it to be the reincarnation of Tezcatlipoca. As such, Aztek was among the first to join the battle against the creature, suffering terrible injury and losing his sight as a result of his first attack. Believing this to be his ultimate purpose, Aztek detonated the entire 4th-dimensional energy source within his suit and helmet in order to grievously injure Mageddon, allowing the remaining heroes to triumph. Mageddon was destroyed largely thanks to Aztek’s sacrifice, thereby fulfilling Quetzacoatl’s prophecy, but the question remains: how can anyone be sure that Mageddon was, in fact, the shadow god Tezcatlipoca?

The short answer is that there is no way to be sure. With little factual information passed down from the ancient times, there is no way to tell what form the shadow god could or was likely to take. In essence, the so-called “evidence” that Mageddon and Tezcatlipoca were one in the same was entirely circumstantial. It is possible that following that battle, the shadow god could have resurfaced, with Aztek having misread the god’s return entirely, taking control of his actions and decisions at the expense of his true destiny. This may come across as a particularly bleak reading of a hero’s incredible sacrifice, but ambiguity being what it is, there is another side to the prophecy.

Just as there are no indications that Mageddon was the returned form of Tezcatlipoca, there are equally no indications that it was not. The ultimate destroyer, Mageddon brings death and destruction to all. Given the traditional values ascribed to symbols of light and dark (light being life and good and darkness being death and evil), it is entirely reasonable to view Mageddon as a spiritual reincarnation of the shadow god. In this way, Aztek would have been right to sacrifice everything to beat this enemy.

The ambiguity of prophecy muddies our understanding of destiny. Do we have any agency, any free will at all? Or are we merely pawns in a cosmic chess match? What is fascinating about the DC mythology is that it answers yes to both questions. The existence of magic and mysticism in the DC Universe implies that cosmic forces such as destiny and fate also exist. In particular, characters tied to specific deities such as Wonder Woman (the Greek pantheon) or Deadman (Rama Kushna) are often subject to those divine fatalistic forces. But in both of the aforementioned cases, those heroes have rebelled against those forces and forged a new destiny for themselves. What results is a world where cosmic forces push and propel but free will steers. Certain characters are “destined” to be powerful influences in the world, but what shape that takes can only be determined by the characters themselves.

This may feel like a rather non-committal stance, but it’s wonderfully empowering to imagine that the ultimate factor in destiny and fate and other cosmic forces is the agency of individuals. Aztek is a marvelous embodiment of these complimentary and contradictory forces – a hero who is the product of both science and magic, who chose to be a hero fighting more than the evil he was created to fight. He was the architect of a new destiny for himself, and in choosing to act in a given moment also managed to fulfill a pre-determined destiny. He is both player and pawn, but demonstrates the fascinating mythological premise that just as spacetime or electromagnetism, free will and destiny are two sides of the same coin.