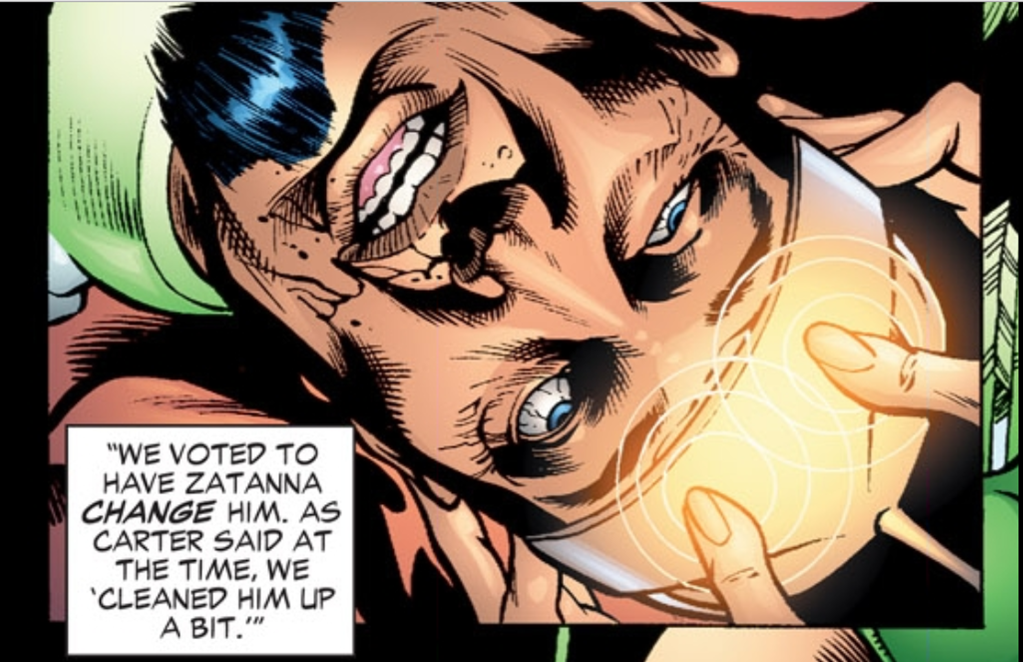 Consequence is a heavily recurrent theme in superhero comics. The simple explanation for this is that consequence is something that we must deal with every day in the real world. It is the relationship between cause and effect: each action produces a particular outcome, each decision alters the game-state in a particular way. Consequence is at the heart of science, where observation and measurement allow us to accurately predict the effect of a given cause. And much like science, consequence is morally neutral. Cause and effect are not inherently linked to notions of “good” or “bad”, they simply exist in a mutual relationship – the exact same cause will always produce the exact same effect because that is the only thing it can do. We may look at the circumstances of the cause-effect reaction and impose a moral judgment, but the hard facts of what happened and why do not change, only our interpretation of that concrete transaction. Consequence is something entirely apart from any divine force or subjective morality; essentially, it is material in nature. However, as anyone familiar with mythology will attest, there is always more to the world than the material.

If the word “consequence” signifies the physical relationship between cause and effect, then all that remains – the spiritual, emotional, and moral relationships – is signified by the word “cost”. Cost, as we understand the word, refers to what we lose in any transaction. Just as any molecular change of state results in the loss of energy, each cause and effect transaction has a moral or emotional cost in addition to the physical consequence. For example, if I drop a vase on the ground, the vase shatters. The vase shattering is the effect, the result of me dropping it, or the cause. What I end up with is a broken vase. This, however, is merely the consequence: the physical sum of the cause-effect transaction. The cost is that I no longer have the vase. I physically possess it, provided I can find all the pieces, but it has ceased to exist in any meaningful way. And with it goes any emotional significance I attached to it. I drop the vase in order to shatter it at the expense of what it means to me.

It is clear that the relationship between cost and consequence is very close – they are effectively two sides of the same equation. In terms of superhero mythology, cost and consequence manifest themselves constantly. The random murder of Bruce Wayne’s parents fostered a desire to end crime; here we see a very clear cause and effect. The consequence of this transaction is that Bruce Wayne becomes Batman – specifically in the sense that he physically dons the costume and fulfills the role of Batman. The cost of becoming Batman is the much-explored underdevelopment of his personal life; the sacrifice of his own happiness in love and life in order to devote himself to his mantle. While among the clearest or most common examples of the cost-consequence dynamic, Batman is by no means the only example. In fact, all of mythology and storytelling is centred around the idea that for every action a character takes, there is both a material consequence and a non-material cost. This dynamic is heavily explored in the context of DC’s mythology in 2004’s limited series Identity Crisis and its 2005 follow up storyline “Crisis of Conscience” in JLA #115-119.

In Identity Crisis, the Elongated Man’s wife, Sue Dibny, is murdered and her body burned. The investigation of this murder reveals a secret in the past of the JLA: that years earlier, supervillain Doctor Light had raped Sue Dibny on the JLA satellite. To prevent him from continuing to haunt the Dibnys, the JLA members voted to allow Zatanna to use her magic not only to erase Doctor Light’s memory of the event, but also to alter his personality, making him less of a credible threat to anyone. As the story continues, it is revealed that Batman was present for this event and opposed the proposed tampering and so he too had his memories altered by Zatanna. Through Identity Crisis and “Crisis of Conscience”, we learn that the incident with Doctor Light is not the first time Zatanna has been called upon to use her magic in this way, having previously done it at least once to the Secret Society of Super Villains after they learned the secret identities of various Justice Leaguers. In both storylines, those whose minds had been tampered with regain their memories, or realize what had been done to them, and the revelations greatly influence the events of 2005’s Infinite Crisis series.

Where Identity Crisis still had to resolve the murder of Sue Dibny, as well as set up the morally ambiguous course of action taken by the League, it wasn’t until “Crisis of Conscience” that Zatanna was forced to confront her actions. Still reeling from the events of Identity Crisis, “Crisis of Conscience” substitutes the importance of the action, which is a largely tangential battle between the Martian Manhunter and Despero, with an examination of Zatanna’s own perspective on what she has done. In addition to the mindwipe of the Secret Society, Doctor Light, and Batman, she reveals that she has tampered with the Martian Manhunter and Catwoman as well. In the case of the former, it was to ensure that he could not telepathically sense any stray thoughts of the Doctor Light mindwipe; in the case of the latter, Zatanna’s manipulations went much deeper, with her magic revealed as the cause of Catwoman’s morality shift from arch-villain to anti-hero.

In terms of Doctor Light and the Secret Society, it was their actions and their knowledge – the rape of Sue Dibny and the reveal of the Justice League’s secret identities, respectively – that were the cause of Zatanna’s mystical intervention. The mindwipes and personality-altering spells she cast were the effect of those actions and the knowledge. The material outcome of this transaction – the consequence – was that these villains were no longer capable of inflicting the same kind of harm again. And the cost here was potentially very low; Zatanna has little emotional investment in supervillains and could therefore impose her morality with little struggle. Where the seams begin to show is when she uses her powers against her friends and allies. Here, the consequence is similar: Batman and the Martian Manhunter no longer remember or have access to certain events and Catwoman’s morality is shifted closer to heroism. But in this case, the costs are immeasurably high.

Her actions constitute a massive breach of trust. For the Martian Manhunter, the altering of a mind is the worst form of violation. It was done only once on Mars, to his own psychotic brother, Ma’alefa’ak, at great cost and with disastrous consequence – the genocidal extinction of the entire Martian race. The breech of trust takes a far heavier toll on Batman, whose reliance on his own senses was called into question. Without superpowers, what Batman brings to the table is his incredible mind as both a tactician and a detective, both of which are wholly dependent on him trusting in his own perception and awareness. Zatanna’s interference with his mind compromised the foundations upon which the Batman is built. His resulting paranoia and distrust would lead to the creation of the Brother MK I satellite, designed to monitor all metahumans on Earth – the same satellite that would achieve sentience and undertake a mission to eradicate all metahuman “threats” during Infinite Crisis. But Zatanna’s impact on Catwoman was perhaps the greatest of all. Whatever doubts Batman may have had in his own abilities, he never questioned who he was. Never did he stop to think that maybe he was not meant to be Batman at all. But for Catwoman, Zatanna’s influence did just that – her self-perception was shattered and she was no longer able to discern the true Selina Kyle from the false. All of her years of heroism in Gotham City’s East End were tainted by the possibility that her motives were not her own; her relationship with Batman – predicated on her shift in morality – was undermined by calling into question if any change was truly made at all.

The trust and very identities of these three heroes constitute the cost levied against Zatanna for the use of her magic. While the physical, material impacts of her actions continue to reverberate through the future (Brother Eye’s attack on metahumans, the dissolution of trust in the JLA as a whole, etc.) the moral and emotional impacts are hers to bear. Moving forward from the moment she wiped the Secret Society’s mind, or that of Doctor Light, the chain reaction of cause and effect, though physically independent, is intrinsically tied to her emotional and moral investment in the world around her. This is true of any character any time they make a choice – the material consequences of cause and effect carry on without them, but the moral cost of that chain reaction rests on their shoulders.

What makes Zatanna such a perfect lens through which to comment on the dichotomy between cost and consequence is her relationship to magic. Being immaterial, magic is centred around cost. Any physical consequence is possible and even allowed if the moral and emotional cost is high enough. The demon Neron has granted incredible powers to heroes and villains alike without prejudice. This is because the material destruction or salvation of the world does not register on a magical level; what does register, is the spiritual cost of such a transaction. In the case of Neron, power usually comes at the price of one’s soul – you must condemn your spirit to a specific moral plane (that of Hell, effectively). Magic always comes at a price. So it only makes sense that an examination of cost and consequence should have its focal point in a character like Zatanna. She occupies both the human, physical space while channeling the immaterial forces of magic. Zatanna exists at the convergence of these two perspectives of cause and effect and it is her centrality to the events of Identity Crisis and “Crisis of Conscience” that allows us to examine how these forces play out in the mythology of DC.