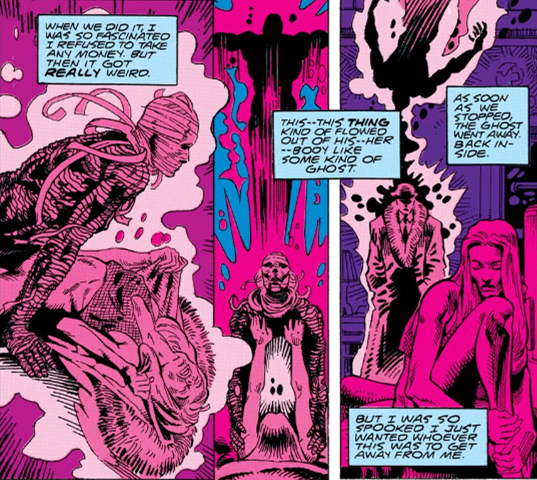 Identity is a key theme throughout superhero mythology. From the secret identity to the moral identity, every hero struggles in their own way to define their place in the world. And though in every character’s mythology there is an element of this struggle, there is one in particular that frames identity as a journey rather than a destination – something fluid and flexible that defies traditional classification. That character is Coagula, a little known superhero from the 1990’s whose transition from civilian to superhero exposed her journey through her own gender and sexual identity.

First appearing in Doom Patrol #70 in 1993, Kate Godwin worked as a freelance computer programmer, though at one time she also worked as a prostitute. One night, while working in the latter career, her client was none other than Rebis – the hermaphroditic amalgam of Larry Trainor (the Negative Man), Eleanor Poole, and the Negative Spirit. In the course of their sexual encounter, the Negative Spirit was released from Rebis’ body, dousing Kate in its powerful radiation, the result of which was the eventual development of her superpowers: the ability to coagulate any liquid or dissolve any solid. Taking the name Coagula, she attempted to join the Justice League, but was eventually recruited by the Doom Patrol after using her powers to take down Codpiece, a misogynistic supervillain whose arsenal of weaponry was stored in a massive, mechanical codpiece. Coagula remained on the misfit team for many years, until she was killed in a psionic explosion in 2002’s Doom Patrol #9.

Coagula’s comic book existence is relatively obscure, appearing a mere handful of times in the nine years she was active, but she is nonetheless a noteworthy part of DC’s mythology; in addition to being openly gay, she is one of the first transgender characters in comics. And though those two elements are significant in their own right, what makes Coagula such an important and dynamic character is how her mythology explores and exposes the fluid nature of identity.

On a very literal level, Kate’s early appearances revolve quite heavily around issues of identity, specifically in terms of the culture of superheroism. She takes up the name Coagula because, to her mind, one of the foundational elements of the superhero is the secret identity. To this end she also feels the need to have a costume. Before engaging Codpiece in what would be her first ever battle, she puts on a frog mask because it is the closest thing to a costume that she has in her bag. When she arrives at the home of the Doom Patrol following the battle, she again insists on using her codename and asks if she needs a costume before she submits herself to the Chief’s training exercises. She is almost taken aback when the Chief, and later Robotman, call out her costume and, more specifically, that she refers to herself as a superhero – something with which the other members of the Doom Patrol do not identify.

There is a certain irony in how rigidly Kate clings to her perception of what a superhero is and does. Being a gay, transgender woman, the expectation might be that Kate is not prone to classification or rigid social structures, and yet her journey through gender and sexuality is as rooted in social conventions and expectations as her journey through heroism.

Kate self-identifies as a lesbian. This is a word with an incredibly strict definition: a woman who is only attracted to other women. And yet two of the most significant sexual/romantic encounters of Kate’s comic book appearances were not with women – she gained her superpowers by having sex with Rebis, who in one corporeal form contained the merged bodies of both a man and a woman; and later when she joined the Doom Patrol, she began a romantic relationship with Cliff Steele, aka the Robotman. The former represents a purely physical relationship while the latter has a deeper emotional foundation, but in both cases what is clear is that in spite of identifying as a lesbian, Kate’s sexual and romantic preferences are far more nuanced and complicated.

So why is Kate so bound by classification? I believe that it is as simple as it being a function of society. Kate is, after all, a product of a largely hetero-normative society, and regardless of how she has fought for her own identity, she continues to view everything as a binary; man or woman, gay or straight. This conflict between where Kate falls and the labels with which she attempts to identify herself is exposed in “The Teiresias Wars” – a five part arc in Doom Patrol #75-79. In it, two ancient forces battle for the soul of the Earth: the Builders, who aspire to rigid order; and the Teiresiae, beings who represent fluidity and change. In the heat of the battle, the Teiresiae believe that order and inflexibility are so woven into the world that they must destroy it completely in order to start over again. What ultimately stays their hand is Kate’s own realization about the fluid nature of her identity. What she discovers is that although her exterior form has been either that of a man or a woman, her soul is not so easily defined. She may identify as a woman or a lesbian, but she is more attracted to personalities than to a gender. She exists in the space between the rigid structures of society.

It may, at first glance, seem odd that such an important issue as that of identity (sexual, gender, and otherwise) falls to such a relatively little known character, but Coagula truly is the perfect mythological vessel. There is a beautiful parallel between her journey through gender and her journey as a hero. She is constantly confronted by rigid conventions and expectations – pressures that are both external and come from within herself. And perhaps most powerfully, her discoveries in both domains are tied to her experiences with the Doom Patrol, and specifically through the application and exploration of her powers. She is quite literally the embodiment of broken convention. Her power to coagulate liquids and dissolve solids mirrors the appeal she makes to the Teiresiae; she may change the exterior form of a given object, but she doesn’t change what it is. Unlike Firestorm who transmutes elements, Coagula does not turn glass into water; glass remains glass, but merely changes state. In essence, she proves that the inherency of an object is adaptable and fluid, so to speak, and continues to exist no matter what form it takes.

As one of the first transgender characters in comics, Coagula’s mythology stood at the vanguard of social justice in the medium. Her run in the DC/Vertigo Doom Patrol series was a nuanced and complex portrayal of an equally nuanced and complex issue, and despite her relative obscurity, she stands as one of the DC Universe’s strongest explorations of identity.