Inherency and the Legacy of Ma’aleca’andra 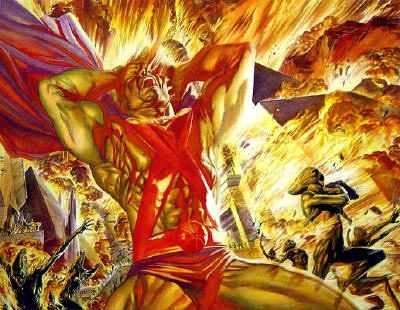 25 Feb Inherency and the Legacy of Ma’aleca’andra

As a society, we like to believe that we can change. Individually and collectively, we place a great deal of faith in our ability to recognize our own shortcomings and to transcend our biological programming to become something better. Self-improvement is a cornerstone of modern society and where the self isn’t capable, we employ the help and guidance of others. This can range from something as menial as hiring a personal trainer to help us lose weight (which, in some cases, is made very difficult by a certain type of genetic makeup), to psychologically and socially rehabilitating criminals so that they can one day reenter society without falling back into their old ways. And this faith is not totally misplaced. There are myriad examples of nurture triumphing over nature – of addictive personalities kicking their habits, of criminals turning around to contribute to society, of people mastering their desires and maintaining a demanding fitness regime. This ability to transcend our perceived limitations is what makes us human.

Unfortunately, that sort of transcendence is not so good for mythology, which is, by its very nature, archetypal. That isn’t to say that mythological characters cannot achieve great things or better themselves, but rather that from a storytelling perspective what best serves the mythology is a certain degree of nurture taking a backseat to nature. The roles ascribed to characters in mythology define them more rigidly than in other literature – the hero, the villain, the lover – and this serves to create enough distance between their world and ours for rich, allegorical storytelling. In a sense, what defines mythology is the concept of inherency – that there are certain qualities, including those of good or evil, that are coded and cannot be overwritten, at least not in the long term. DC’s mythos is no different and though many characters are examples of such inherency, it is the Martian Manhunter (J’onn J’onzz) and his nemesis Ma’alefa’ak who represent the concept itself.

Ma’alefa’ak before the Assembly of Minds – Martian Manhunter #6, DC Comics

Before the two were enemies, they were brothers. This, however, did not stop Ma’alefa’ak from psychically assaulting J’onn’s wife. The psionic abilities of Martians are the core of their society – one which is open, empathetic, and trusting – so the crime of mind-rape is not only brutally destructive to the victim, but also flies in the face of what it means to be Martian. Brought before the Assembly of Minds, Ma’alefa’ak’s only defense was that he was compelled to satiate needs that the others simply could not understand. In response to being completely unapologetic, the Assembly moved to psychically strip Ma’alefa’ak of his psionic abilities and to scrub his memory so that he not only forgot his crime, but also that he ever possessed the psychic abilities of other Martians. In his last moments before the sentence was carried out, Ma’alefa’ak exclaims that even if he didn’t understand why, he would still hate and would seek out vengeance – essentially arguing the inherent nature of his evil.

He would prove himself correct, in the end. Now believing that he never possessed psionic abilities, Ma’alefa’ak feels estranged from his fellow Martian. Unable to connect on the level they do, he believes himself to be a freak and with each passing day resents his people more and more. As an unforeseen side-effect of the mind-wipe, Ma’alefa’ak also no longer possessed a psychic and physical vulnerability to fire and he chose to use this to exact his revenge on the rest of the Martian race. He developed H’ronmeer’s Curse, a plague named after the Martian god of fire, which targeted Martians via their telepathic abilities, causing them to burst into flames. The plague was also transmitted via telepathy. The result of which was the total annihilation of the Martian race except for Ma’alefa’ak, who was immune, and his brother J’onn, who was accidentally transported through space and time to Earth, where he would become the Martian Manhunter.

The inherency of Ma’alefa’ak’s evil is central to this story. When he first commits a malicious act, the Assembly of Minds doles out their harshest punishment, but even his mind-wipe allows him to remain a member of Martian society, if not estranged from it. In a literal sense, they allow him to start over, but as he himself predicted, evil is in his nature and surfaced again even without him fully understanding why. What is truly interesting about this inherently evil nature, however, is that Ma’alefa’ak does not represent the first time a Martian has been “reprogrammed” as a matter of punishment or precaution. In fact, all of them have.

The Guardians of Oa vs the Burning Martians – JLA #87, DC Comics

The Martian race that existed up until the outbreak of H’ronmeer’s Curse was a peaceful, empathic one, but they were not always that way. Twenty thousand years earlier they were known as the Burning Martians. This race was constantly ablaze and they desired the feelings of suffering and torment in others. In fact, they depended on the heat of an inferno and the psychic suffering of others in order to reproduce. They waged violent internal wars for centuries but at the point where their technology was advancing enough that they could pose the serious threat of interstellar conquest, the Guardians of Oa stepped in, instilling in them the physical and psychic weakness to fire that would come to define the Green and White Martian races.

The Guardians essentially did to the entire Martian race what the Assembly of Minds did to Ma’alefa’ak. They changed something fundamental. They tried to alter a quality inherent to identity – they were called the Burning Martians and were constantly consumed in flames before the Guardians forced a psychosomatic fear of fire into their psyches. That is a blatant revision of the inherent nature of Martians. It was largely successful too, which is where Ma’alefa’ak fits back in.

Ma’alefa’ak represents the point where the Guardians’ intervention faltered. Beyond being evil, he is actually channeling the practices of the Burning Martians. His attack on J’onn’s wife was a telepathic assault, an invasion of her mind that forced her to suffer immeasurably. Ma’alefa’ak claimed to the Assembly of Minds that he had needs to be fulfilled. This, to me, sounds in some way like the ancient reproductive desires of the Burning Martians seeping through. They, like him, required the psychic suffering of others. This would no longer allow him to reproduce the way they did, but that desire and his willingness to act upon it scream of the Martians’ brutal former selves. This is only exacerbated by the proceeding mind-wipe, removing his vulnerability to fire and metaphorically letting his full, inherent brutality out, which he uses to cause an extinction-level event that destroys his entire race.

The Martian Manhunter discovers this inherent evil in himself, too. When he tries to remove in himself his vulnerability to fire, feeling that it prevented him from saving the lives of other Justice Leaguers, he accidentally removes the Guardians’ psychic block, releasing the identity of Fernus, his Burning Martian self. As Fernus, he orchestrated a nuclear attack in North Korea in an attempt to recreate the conditions necessary for him to spawn.

Inherency is itself inherent to mythology and the stories of these two Martian brothers demonstrate both a certain fatalism and the struggle for transcendence. In the case of Ma’alefa’ak this is very obvious, with his malicious nature surfacing even before his mind-wipe. But even for J’onn J’onzz, what we see is that his inherent nature – that of the ancient Burning Martians – can be repressed, ignored, and even forgotten, but it can never be truly erased. It is as much a part of him as his DNA. Nurture can triumph over nature, but only temporarily. Nurture must constantly win battles, but nature only needs to win once.

The Martians’ inherent nature seems appropriate considering that to us, their planet shares a name with the Roman god of war. Perhaps the final proof of inherency in the DC Universe is that, in the Martian language, it is also named for their war god: Ma’aleca’andra.