On Good and Evil 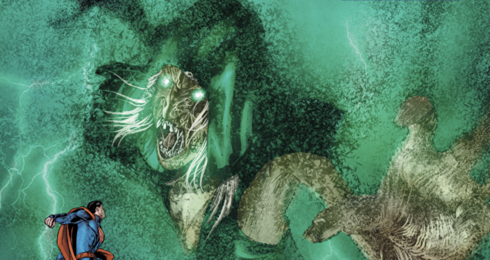 When it comes to discussion of superhero comics, the most common defining trait for characters tends to be their morality. Good and evil have traditionally been seen as such absolutes within the genre that characters were exclusively referred to as superheroes or supervillains. It wasn’t truly until the Bronze Age of Comics that the arbitrary nature of this morality was called into question. Violent and self-serving heroes and villains with noble intentions crept into the mythology, muddying the waters of comic book morality and exposing the fact that good and evil are not absolute concepts so much as they are ends of a moral spectrum.

If morality is a spectrum, then the only possible definition of terms like “good” and “evil” is a relative one; that is to say, someone is only good in relation to someone less good than they are. A hero who kills criminals is “good” compared to a violent criminal, but if a hero kills a petty thief, then which is the hero and which is the villain?

This moral conundrum is foundational to the mythology of the Enchantress, a powerful magic user who has been both an unequivocal superhero and a terrifying and ruthless supervillain.

The Enchantress was created when June Moone, an ordinary human woman, was bonded to an evil Succubus by the demon Dzamor. The demon, for its own reasons, believed that it could mitigate the evil of the Succubus – who went by the name Enchantress – by joining it to June, who was inherently good. This worked for a time, with June channeling the Enchantress’ power, but due to a shift in the position of the moon (caused by Supergirl) during a time of astral alignment, June was unable to hold back the evil of the Succubus, who took her over completely and became a supervillain, even joining Vandal Savage’s Forgotten Villains. Over time, however, June begins to regain some control over the Succubus, voluntarily joining the Suicide Squad in exchange for Amanda Waller’s help containing the Enchantress’ evil will. She is eventually able to achieve some measure of control and begins atoning for her villainy as a member of both the Sentinels of Magic and also the Shadowpact, a group of magical heroes who first stood assembled against a renegade Spectre during the Day of Vengeance.

In a very literal way, the Enchantress has been both good and evil, both of which are easily defined in relation to each other. Of course, there are several other characters who have crossed the floor from villain to hero – or vice versa – but what makes the Enchantress so intriguing and important to the mythology is that regardless of the morality of her actions, she has always possessed both good and evil within her. And unlike Doctor Polaris, whose split personalities were good and evil, respectively, the Enchantress is a much clearer embodiment of the entire spectrum of morality.

June Moone’s increasing control over the Enchantress during her time with the Suicide Squad was not simply a matter of resisting the Succubus’ influence. It was revealed that, by not channeling any magical powers, she could deny the Enchantress the means to exert an influence over her. What this meant, however, was that each use of magic empowered the Enchantress proportionally to the amount of magic used. And over time, this cumulative magical reserve placed June’s control at considerable risk before eventually collapsing altogether during Day of Vengeance, when the overwhelming flood of magic channeled through her released the Enchantress and threatened to destroy the Shadowpact. This gradual siphoning of power is, in a very literal way, symbolic of the gradation of evil as it would exist on a moral spectrum. One could argue that, as the balance of power shifts from June to the Enchantress bit by bit, that she therefore becomes increasingly evil.

But not only are good and evil relative in terms of their degree, but the terms themselves are locked in a binary relationship. That is to say, good and evil are defined in opposition to the other.

This holds true within the mythology of the Enchantress. On more than one occasion in the character’s history, the Enchantress has been separated from June Moone, and though this would seem to be beneficial to both parties, the reality of the situation proves otherwise. Pre-Flashpoint, the Enchantress was separated from June and bonded to Nightshade – who was originally intended to be the Succubus’ host. This should have come as a relief to June, but the separation left her depressed and desperate to regain the Enchantress’ power, to the point that she attacked Nightshade in order to reunite herself with the Succubus. Likewise, in the New 52, when Madame Xanadu separates June and the Enchantress, the latter scours the Earth trying to find June so that they can be reunited.

Both halves of the Enchantress are willing to sacrifice their individual freedom in order to remain together. The reason, put simply, is that apart, they lack purpose or meaning. They are incomplete entities. Just as they are representations of good and evil, June and the Enchantress are defined by their relationship to each other; June is good because the Enchantress is evil, and vice versa. And as is the case with morality, their relationship is symbiotic, with each in conflict with and reacting to the other.

Symbolically, the Moon is a representation of change and inconstancy; it shifts from full moon to new moon to full again, as well as shifting position in the sky. It is the very embodiment of relativity – we only call a full moon full because it will change to a new moon. If it never changed, there would be no need to qualify it; it would simply be the Moon. How appropriate, then, that the Enchantress’ alter ego is also named Moone. Her mythology is an iconic reminder of the relativity of morality. Within her, one sees how either extreme relies on the other for existence. Without good, there would be no evil; likewise, without evil, there would be no good.

@DoctorDCOct 23
If a Green Arrow title comes back, it should be Connor. Ollie can have his League / Checkmate adventures, in the wa… https://t.co/DTcqWQir6j

@DoctorDCOct 21
@Midnighter1309 @GailSimone From the Rachel Pollack run of Doom Patrol, so from quite a long time ago. First appear… https://t.co/x7NvF2vkW5