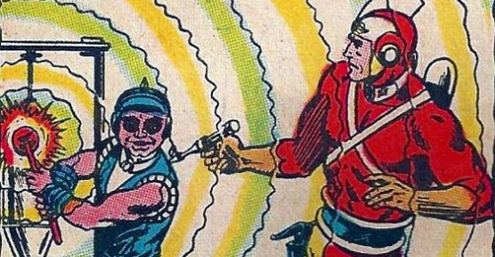 Traditionally, major comic book rivalries form through one character’s solo title. This is usually the case because in order to establish a character as a credible rival, there must be ample page space and narrative weight given to them to justify that “archenemy” status. Beyond the obvious, some classic examples are the Atom and Chronos, Hawkman and Shadow-Thief, and Black Lightning and Tobias Whale; all of which were established through the heroes’ own respective titles. But even though this is the trend, it does not mean it is the only way to build a rivalry.

One of the greatest examples of a rivalry forged between supporting characters is that of Adam Strange – the human protector of the planet Rann – and the intergalactic dictator Kanjar Ro who built as solid a rivalry through the pages of Hawkman and Justice League of America as many others have done through their own titles.

Adam Strange made his first appearance in Showcase #17 in 1958, part of a shift towards more science-fiction oriented stories that defined the Silver Age of Comics. An archaeologist by trade, Adam Strange was accidentally transported across the galaxy to the planet Rann by an experimental technology called the Zeta Beam. On Rann he met the Zeta Beam’s creator, a scientist named Sardath, who had hoped to establish communication with Earth but had unknowingly created a teleportation technology. Stuck on the alien world, Strange agreed to protect the people of Rann from alien threats using technology and equipment provided by Sardath, with additional assistance provided by the scientist and his daughter, Alanna. Strange would inevitably return to Earth once the effect of the Zeta Beam radiation wore off, but was able to regularly return to Rann by being in the right Earth location at the right time when the next Zeta Beam was scheduled to arrive.

Adam Strange is armed with a highly sophisticated Rannian spacesuit, which allows him to survive in the vacuum of space as well as other adverse conditions, in addition to protecting him from various physical threats. He also has a jetpack, which allows him to fly, as well as an energy gun. While not originally a strong combatant, Adam Strange has developed considerable skill with his equipment, and takes advantage of Rann’s different gravity, which grants him enhanced strength and endurance. Additionally, he is a brilliant scientist across many disciplines.

Though Adam Strange is primarily a hero on Rann, he has been a member of the R.E.B.E.L.S. and the Justice League of America, often teaming up with the Silver Age Hawkman and Hawkgirl (Katar and Shayera Hol) on their interstellar adventures. He would also eventually marry Alanna.

On his home planet of Dhor, Kanjar Ro rules as a vicious dictator. In constant contest with the rulers of three neighbouring planets, Kanjar Ro once kidnapped the Justice League of America, attempting to use them to gain control over all four worlds. Though this would mark his first comic book appearance – in the pages of Justice League of America #3 – he would truly make his mark as a villain when he came to Rann. He would try several times to conquer the planet, and in one such case he succeeded in poisoning the atmosphere with radiation such that Adam Strange could not remain on Rann for extended periods of time. His assaults on Rann constantly put him in the path of Adam Strange and the two would become frequent enemies.

Kanjar Ro is a ruthless and talented dictator, possessing a particular Machiavellian talent for manipulation and coercion, which he has demonstrated against the Justice League, Despero, the Green Lantern Corps, and even the Silver Age Hawkman’s homeworld of Thanagar. He is a talented strategist but possesses only average combat ability himself. He instead relies on an assortment of alien weapons as well as specialized technology such as the Gamma Gong and the Sceptor, which enable him to levitate, create energy constructs, and project his astral self through space.

Out for his own ends alone, Kanjar Ro is not traditionally affiliated with any particular group, choosing instead to side or deal with those who can provide the most immediate and powerful assistance.

The rivalry between Adam Strange and Kanjar Ro is interesting because, largely, it is a rivalry that has developed outside of an Adam Strange solo title. Both characters are supporting cast to larger heroes or teams – notably Hawkman and the Justice League – and yet through these assorted stories they managed to find in each other the makings of the perfect archenemy.

There is an obvious juxtaposition in terms of their relationship to science. For Adam Strange, science is about discovery. As an archaeologist, he unearths ancient civilizations and attempts to piece together an understanding of how they lived. That understanding is entirely predicated on what he can find buried in the ground, making the act of discovery of paramount importance. To Kanjar Ro, however, science is a means to an end. For all of his use of technology, there is little to suggest that he is himself a capable scientist. Instead, he takes the scientific discoveries of others and uses them to influence and oppress his enemies. This, of course, translates to their relationships to people as well; Adam Strange is personable and inquisitive, forging lasting friendships with Sardath and other Rannians as well as falling in love with Alanna. Kanjar Ro, by contrast, has no interest in the people of the world’s he has sought to conquer so long as they submit to his will.

Essentially, what separates Adam Strange and Kanjar Ro are their opposing views in terms their place within a wider society. Kanjar Ro is selfish and egotistical, believing himself to be superior to others. He demonstrates this each time he chooses manipulation and deceit over friendship and cooperation. He seeks the aid or skill or power of others but wishes to give up none of his own. That sense of entitlement then extends to his political desires, where he not only aspires to power on his own world, but also the neighbouring three worlds to Dhor, to Rann, to Thanagar, and even the prison planet to which the villains of Earth were exiled during Salvation Run. All of this without much evidence to suggest that he is either a capable leader or able to achieve these lofty goals without the crutch of the incredible technology he uses to grant himself actual power. Adam Strange, on the other hand, represents someone from a position of relatively little power – an unknown scientist from Earth whose bizarre fortune led to his arrival on Rann, where he would inherit great power through the friendships and relationships he formed. That power, built on those relationships, are not a egocentric ploy but rather a means for him to protect Rann and the people for whom he has grown to care.

The tired cliché of “with great power comes great responsibility” comes to mind, and though the phrase is arguably overused, it is remarkably fitting when discussing this rivalry. Adam Strange feels the weight of that responsibility and acts selflessly to protect a world that – beyond not being his own – is not capable of fighting for itself. Where he seeks to protect Rann’s peaceful ways, Kanjar Ro seeks to exploit it, wanting to conquering the planet not for the betterment of his future subjects but rather for the sake of conquest itself.

It is this fundamental opposition that drew these characters together across the titles of various other, better known characters, and has elevated them to a rivalry worthy of the mythology.

**This article was originally published on Modern Mythologies**